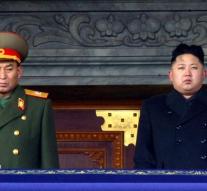 new york - US President Donald Trump does not allow North Korea to develop any other choice than missiles that can hit the targets on the US mainland. That said the North Korean Foreign Minister Ri Yong-ho on Saturday for the United Nations in New York.

'After a long and difficult battle, we are only a few steps away from the gate to completion of nuclear power,' said Ri. The ultimate goal is to achieve a balance of power with the United States. 'It is hard to imagine that the DPRK (North Korea) will only deviate one centimeter by stricter sanctions of hostile forces. '

The North Korean minister stated that his country is not planning nuclear weapons against countries that do not participate in US military action against North Korea. But Pyongyang will not shame 'preventive action without mercy' when the US 'and their vassals' commit an attack to 'hijack the regime.' '