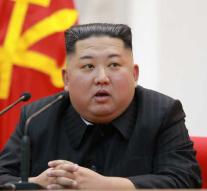 new york - A North Korean top official has admitted that his country is suffering from food shortages. This appears from a memo that has been acquired by the American NBC News.

The North Korean UN ambassador Kim Song writes in the document that in 2018 his country produced 503,000 tons less food a year earlier. According to him, this is due to unprecedented high temperatures, the drought, heavy rainfall and the international punitive measures against the regime in Pyongyang.