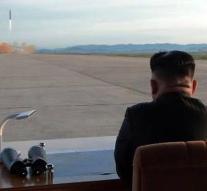 moscow - North Korea is again preparing a long-range rocket test that, according to Pyongyang, is capable of striking targets in the US. That reported a Russian parliamentarian, Anton Morozov, after returning from a visit to the country.

'They have given us calculations that prove that their rocket can hit the west coast of the US,' he said. The MP was with two colleagues in the last four days in north korea. 'As far as we understand, they are planning to launch a new long-range racket in the near future. '

Morozov called the attitude of the North Koreans 'fiercely. '