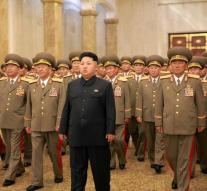 Chang Kyung-soo answered questions about the nuclear test held by North Korea on Sunday. North Korea said a hydrogen bomb had to be tested that could be mounted on an intercontinental missile.