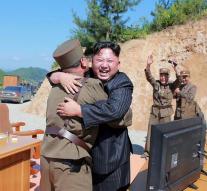 washington - US intelligence services have observed at the North Korean city of Kusong, indicating that North Korea is preparing a new missile test. According to US officials, it is a medium-distance racket or perhaps even an intercontinental rocket (ICBM). The trial launch could take place in a few days.

On July 4, North Korea tested a rocket that, according to Pyongyang, could reach the US state of Alaska. At the same time, North Korea claimed to have mastered the technology needed to provide a rocket with a core head. According to the Washington Post, the Pentagon intelligence service, the DIA, believes that North Korea should already be able to use a nuclear ICBM next year.

Other American analysts do not agree with the DIA's estimate. One said such a rocket would be 'a sampling of old Russian missiles', which only poses a danger to the US and their allies if Kim Jong-un's regime wants to help themselves with soap.