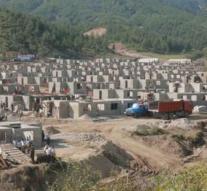 pyongyang - North Korea has suffered persistent flooding. An estimated 600,000 people have been affected by water. About 30,000 houses have been destroyed.

The International Federation of Red Cross and Red Crescent Societies (IFRC) warned Monday of the consequences of the flooding. The IFRC is working with the Red Cross in North Korea to provide the population in the worst affected areas help.

The federation notes the arrival of the first snowfall, which is expected in late October. Then also starts to lower the temperature quickly. In winter the mercury drops in Korea to minus 30 degrees Celsius. Before then must work hard according to the IFRC to replacement housing. There is preliminary $ 15.6 million made available to meet the immediate needs.