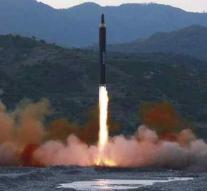 washington - North Korea has tested a rocket engine again. The test might be part of the program to develop an intercontinental ballistic missile, an American official told Reuters on Thursday.

The Americans are deeply concerned about the nuclear and rocket program of the totalitarian regime in North Korea. Pyongyang is likely to work on the development of missiles that the United States can reach.