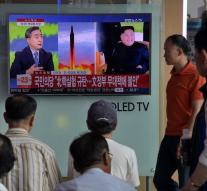 pyongyang - With a big smile on her face, the notorious news reader Ri Chun-hee of the North Korean state television appealed to the great shocking news of Sunday morning for the rest of the world: her country has done a successful nuclear bomb-underground test.

The news that Pyongyang had developed a hydrogen bomb was known a few hours earlier after shooting pictures of dictator Kim Jong-un at a projectile that had to represent the dangerous weapon.

Not much later, the news showed that an earthquake with a power of 6.3 on the Richter scale had taken place at the country's best-known test location.

'Scientists have passed a successful test with a hydrogen bomb that can be placed on an intercontinental rocket,' confirmed KCNA state press shortly thereafter. 'Kim Jong-un congratulates all those involved on their success. '

Years ago, Pyongyang claimed to have already done a similar test, but it was doubted by international experts because the power of the earthquake did not match that at the time. In the meantime it is clear that the test today was six to nine times more powerful than the toughest to date. A hydrogen bomb is many times more powerful and destructive than a 'normal' nuclear weapon.

'This is true,' said American expert Melissa Hanham in a response. 'The measurements seem to point out that North Korea speaks the truth. These are not messages you want to hear. '

The strong earthquake, which resulted in border borders in neighboring China fleeing the excitement almost out of the window, calling residents the emergency number was followed by a second earthquake. Experts assume that the tunnel where the test was done collapsed.

If the analyzes are correct, it is the sixth nuclear test of North Korea, but the first since US President Donald Trump is in power. Washington has not yet responded, but in South Korea and Japan, the most important government officials have been urgently convened.