Home / World / North Korea: missiles are ready for use 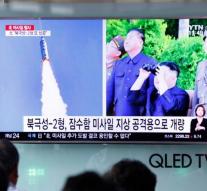 seoul - North Korea successfully fired a rocket that tested the precision and fuel system of the Pukguksong-2 rocket. That has announced North Korea on Monday.

The leader of that country, Kim Jong-un, was present at the launch. He said at the test that the rocket is suitable for deployment. According to North Korea, the rocket can hit America. However, defense specialists in Western countries claim that this claim is excessive. UN resolutions prohibit the country from testing ballistic missiles.