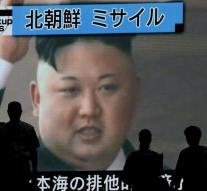 washington - The United States suspects that North Korea has tested an intercontinental ballistic missile (ICBM) on Tuesday. That says two US officials, who emphasize that the available data on the North Korean projectile are still being analyzed.

The North Korean regime of dictator Kim Jong-un announced Tuesday having triumphantly launched an intercontinental missile. Washington opposed that. The US initially concluded that the Pyongyang regime had tested a medium-distance racket. The US government has not yet formalized that estimate.