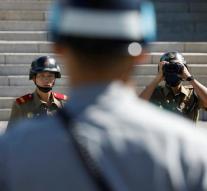 seoul - North Korea fired three short-haul missiles on the east coast of the country on Saturday. According to the US Army, the tests failed and the ballistic missiles exploded in the air and almost immediately upon launch.

According to the South Korean army, the projectiles were fired from the southern coastal province of North Korea. The projectiles ultimately left a distance of about 250 kilometers in the northeast and arrived in the Japanese Sea.

The missiles did not pose a threat to Guam in the Pacific, reporting the US. North Korea had previously threatened with a rocket attack on the US island. The tensions between the two countries then went high.