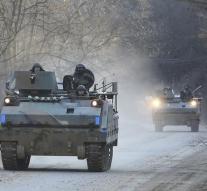 North Korean state media immediately added to the comments of the leader Kim Jong-un: ' Nothing and no one will survive this attack. 'His country gets tighter sanctions imposed because of the heavy nuclear test which North Korea held in September.

If war breaks out, said Kim Jong-un, the South Korean armed forces inflicted a mortal blow. ' Thus their will to resist is already broken at the beginning. 'The political and military leader of the regime in Pyongyang announced that it will hold more exercises next year.

According to the tightening of sanctions North Korea should not copper, nickel, silver and zinc export more. Exports of coal and iron is only allowed to not jeopardize the existence of the population.