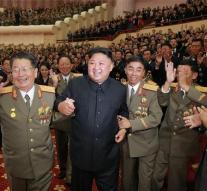 pyongyang - North Korea has threatened to use nuclear weapons against Japan and the United States. The country responded to the new sanctions approved this week by the UN Security Council.

The Committee on Pyongyang's External Relations called for the dissolution of the Security Council. That international organ would be a 'tool of evil' and are composed of countries that are listed on the payroll list of Archbishop USA.

Japan also received the full-fledged statement in the KCNA Statement Office. 'The four islands of the archipelago should be sunk with the nuclear bomb of juche,' said the committee. Juche is the state ideology of North Korea.

In addition, Pyongyang addressed a new threat to the US. 'Let's reduce the American continent to ashes and darkness,' said the committee. 'Let's express our gratitude by mobilizing all the remedies that have been prepared so far. '