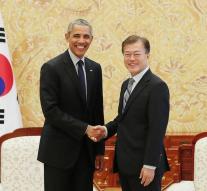 seoul - North Korea has one last chance to enter into dialogue with the international community. That said South Korean President Moon Jae-Monday in a conversation with former US President Barack Obama, who is due to a conference in Seoul.

President Moon said he spoke with President Trump about the use of sanctions and pressure equipment to solve the nuclear and rocket problems around North Korea, 'said a South Korean president spokesman after the meeting. 'He said it is the last opportunity for North Korea to open the door to a dialogue. '