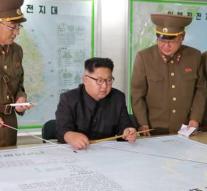 london - North Korean hackers would have stolen a large amount of South Korean military documents. There was also a plan to bring North Korean leader Kim Jong-un to life and plan the US and South Korea for a possible war.

A South Korean parliamentarian says this has been heard of the South Korean Minister of Defense, reports the BBC. Data on major power plants and military facilities in South Korea would also have been in opposition to the opponent.