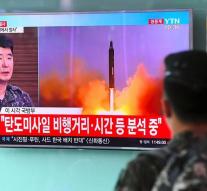 The rocket was fired from an area near the border with China and landed in Japanese territorial waters.

North Korea performed a number of missile tests in recent months. On June 22, a rocket engine was already tested.

The Americans are deeply concerned about the nuclear and rocket program of the totalitarian regime in North Korea. Pyongyang is likely to work on the development of missiles that the United States can reach.