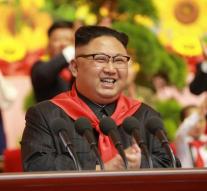 According to a military spokesman, the projectiles were fired on Thursday morning from the North Korean coastal city of Wonhap and fled them for two hundred kilometers, the South Korean press office Yonhap reported. It would be about missiles aimed at ships.

It has been the fourth missile test since the South Korean president Moo Jae-in began on 10 May in his term of office. The launch follows less than a week after the United Nations decided to tighten sanctions against North Korea because of persistent missile testing.