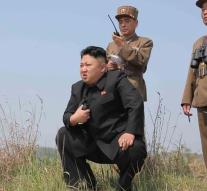 moscow - North Korean officials do not want to talk to Russia with their South Korean colleagues. A proposal for this has been rejected.

Both countries are represented at a meeting in Russia. Moscow had asked them to take the opportunity to consult with each other. It would be possible to bring the countries closer together, including the North Korean nuclear weapon program. But according to the Russian press office RIA, North Korea has rejected the plan.

In addition, Russia has started a ferry route to North Korea again. The boat, for passengers and cargo, has stopped for two months. The port of Vladivostok discontinued all the services for the boat because the company found no payment for it. For the time being, the boat only carries freight and negotiations are still being negotiated on resuming passenger traffic.