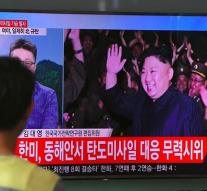 seoul - North Korea said Monday that it would not attract anything from the sanctions announced by the United Nations on Saturday against the country. 'The sanctions are a breach of our sovereignty. We will take appropriate measures, 'said a statement from the North Korean state press office, KNCA on Monday.

The US Secretary of State, Rex Tillerson, said during his visit to the Philippines Monday that 'the United States and other parties involved are open to dialogue with North Korea under the right conditions.'

The draft resolution agreed with the United Nations Security Council prohibits North Korea from exporting iron, coal and lead. North Korean exports are expected to decrease by about one third. North Korea exports annually for over 2.5 billion euros.

In the conflict between North and South Korea, after a short conversation between the foreign ministers of both countries, there is no relaxation. North Korean minister Ri Yong Ho offered an offer for more detailed discussions, South Korean government sources reported Monday in the Philippine capital of Manila.

Ri had suggested South Korea that it showed too little 'sincerity'. The meeting between Ri and his South Korean colleague Kang Kyung Wha took place on Sunday evening in the margin of a dinner for the 50th anniversary of the Association of Southeast Asian Nations (ASEAN). According to the South Korean press office Yonhap, the conversation was over after three minutes. Both ministers shook hands.

South Korea's new president, Moon Jae-in, had invited the North to talk to the North last month to reduce tensions along the Korean border. At the same time, he met with a chairman of the Red Cross to facilitate the reunification of families.