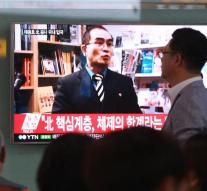 pyongyang - North Korea calls the senior diplomat who defected to Britain to nemesis South Korea,, human scum '. The diplomat would be beaten on the run to escape punishment for a range of crimes including child rape, and embezzlement of state funds.

North Korean state media took Saturday off to the man. The regime in Pyongyang wants his extradition.

Thae Yong Ho was deputy ambassador to the North Korean Embassy in London. Meanwhile, he arrived with his family in South Korea.