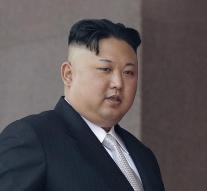 new york - North Korea accuses US authorities of 'robbery' of diplomats. A delegation from the Stalinist country had to pay a parcel, according to state press office KCNA in New York. According to Pyongyang, that proves that the United States is 'a lawless state of affairs.'

The North Korean diplomats attended a UN conference earlier this month on the rights of the disabled. The delegation would then be approached at John F. Kennedy Airport by employees of the US Department of Internal Security and the police who took the package.

The Americans 'committed a violent attack as if they were gangsters,' a spokeswoman for the North Korean Ministry of Foreign Affairs complained. 'They took off diplomatic diplomatic package. 'According to the spokesman, the question arises as to whether the United Nations headquarters belong in New York.

The White House and the US Department of Foreign Affairs did not want to respond to the North Korean complaint. The tension between the countries has increased since Pyongyang released the American Otto Warmbier (22). He appeared to be in coma, according to his father because he was seriously injured during his imprisonment.