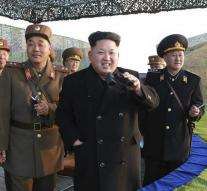 seoul - North Korea has the only diplomatic channel of communication with the United States and said that all matters between the two countries in future be dealt with under the law of war. This also applies to the two US citizens imprisoned in North Korea.

The decision by North Korea is a response to new US sanctions that have been Pyongang against the regime, reported the North Korean state news agency KCNA. The US put North Korean companies and North Korean leader Kim Jong-un recently blacklisted for violations of human rights. North Korea called it a declaration of war.

North Korea is holding two Americans prisoner convicted of crimes against the state. North Korea and the US have no diplomatic relations; Diplomatic contacts were through the United Nations.