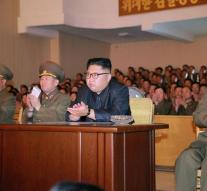 washington - US intelligence services assume that North Korea has the technical know-how and capabilities for long-range rocket engines. 'We have information indicating that North Korea no longer has to rely on imports of engines. Instead, we think they can produce themselves, 'says a spokesman.

According to a recent study of a London think tank, quoting The New York Times, the regime in Pyongyang has been receiving rocket engines of suspected Ukrainian fabric through illegal channels. That would explain the rapid development of the North Korean armor's arena.