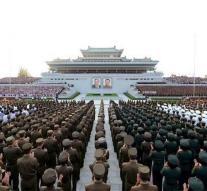 - North Korea must be considered capable of January 1, 2017 to make twenty atomic bombs. The regime in Pyongyang is doted by the end of the year over the required 300 to 400 kilograms of highly enriched uranium.

Those calculations come from the pen of the leading US weapons expert Siegfried Hecker, a scientist at the prestigious Johns Hopkins University in Baltimore. North Korea, as stated, does with its nuclear program Hecker Wednesday in Washington a lot faster progress than we ever adopted in the West.

North Korean leader Kim Jong-un must feel particularly encouraged by the nuclear test Friday, said nuclear scientist. Hecker called for in the US capital for the early resumption of diplomatic talks with the North Koreans to avoid escalation.

The nuclear test Friday led worldwide distressed reactions and the call for tighter sanctions. Among others called on President Obama to do so.