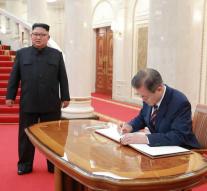 pyongyang - North and South Korea have taken a new step in the peace process between the two countries. The North Korean dictator Kim Jong-un and the president of South Korea, Moon Jae-in, have agreed during the three-day summit in Pyongyang to work for a nuclear-free and peaceful peninsula.

Kim has promised, according to news agency Yonhap, that international observers will be allowed to supervise the 'permanent dismantling' of the most important missile installations. The country is also willing to close the Yongpyong nuclear research center. For the latter, the United States must take equivalent measures.

Kim and Moon spoke at a joint press conference. According to the South Korean president, they have agreed that the Korean peninsula should become a 'land of peace without nuclear weapons and nuclear threats'. Kim said he will soon be visiting Seoul. Presumably that is before the end of this year.

The two leaders will sign a statement after the second day. According to Kim, 'the September declaration' offers more room for the improvement of relations between north and south and brings 'the era of peace and prosperity closer. 'According to Moon, it is the first time that the two countries spoke about denuclearization of the Korean peninsula.

The two countries also announced that they want to organize the Olympic Games together in 2032.