Home / World / Non must be out of Philippines after demonstration 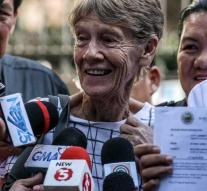 manila - The Philippines have withdrawn the visa from an Australian nun and given her 30 days to leave the country. The reason is her participation in an anti-government demonstration.

The 71-year-old sister Patricia Fox has been living in the Philippines for 27 years, where she heads Our Lady of Sion, a Catholic congregation of nuns. She was given the watch after the Filipino president Rodrigo Duterte complained about her participation in the protests.

From the immigration office she was told that she had participated in 'activities that were not allowed under the terms of her visa. 'She can return as a tourist.

Fox had been detained for a day last week. This happened after Duterte ordered an investigation into alleged 'misconduct' of the nun.