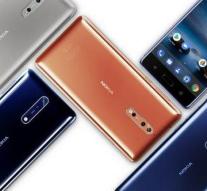 london - Nokia has been relegated and launches a new smartphone in September. The Nokia 8 costs 599 euros and comes in four colors. He runs on Android Nougat.

The Nokia 8 is the first flagship of the new company. The price means that the device will be cheaper than other high-end smartphones.

The device will include a dual-Sight Video: a 13 megapixel photo and video camera that simultaneously can shoot forward and backward. Those images can be seen in a split screen. According to Nokia, these livestocks are even more compact. The smartphone gets 64GB of storage and 4GB of memory.

The new Nokia has been up to now on cheaper devices, such as a new version of the classic Nokia 3310. The company has already launched two budget smartphones, the 3 and 5.

The 8 is the first flagship of the new Nokia. The company was once the most important mobile phone manufacturer in the world, but missed the transition to smartphones. Nokia was purchased by Microsoft in 2014, after which the brand name disappeared. Microsoft wanted to join the mobile market, but the merger was not successful and Microsoft has dropped Nokia late last year. The new owner is HMD Global, founded by the old Nokia's top.