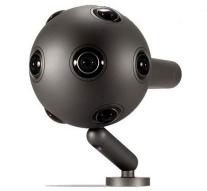 - We knew mainly from the Nokia mobiles, perhaps the company will mostly be known in the future as a pioneer of virtual reality. Since it has made ​​a special camera to record videos in this manner.

The ESE- camera can record film in 360 degrees along with eight synchronized camera sensors that can record in 2K resolution. That's hefty hardware and the price tag is really looking, the ESE will cost $ 60. 000. Also, the accessories that may cost : only the charging dock costs already $ 1,500. The cameras are delivered in the first quarter of 2016, although there are already companies who take the ESE. How it works jaunt, one of the first VR movie studios, all with the camera of Nokia.
NEW