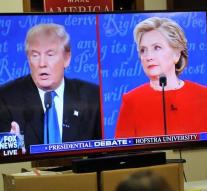 - The first debate in the US presidential election between Hillary Clinton and Donald Trump was as expected fierce. Trump started strong when inter alia dealt with international trade agreements, but Clinton had clearly substantive knowledge.

Trump came in the first half hour to its promise with his message about the economy. He denounced the political elite in the United States- Clinton ahead- and insisted that he would prevent the departure of businesses and jobs. Clinton got here occasionally entangled in details and about the difference between her former and current positions.

The last hour was less fortunate for Trump. Although he was not as explosive as some previously expected, he gasped almost every time Clinton was trying to lure him out of the tent. Clinton denounced include Trump's statements about women. ' This is a man who has mentioned women pigs and dogs. '' Trump gasped and said comedian Rosie O'Donnell asked for it when he called her a pig.

Debate Leader Lester Holt kept largely aloof, but the few times he Trump with his own statements or indisputable facts confronted the Republican candidate Holt attacked. Holt punctual inter alia, that Trump himself prior to the invasion of Iraq had handed down in 2003 for the war, which Trump kinds of hard to follow byways struck.

Even when the debate on Trump's past as a so-called 'birther' went- Trump for years attracted the origins of President Barack Obama in doubt- seemed the Republican candidate to cut himself in the fingers. ' He put his first steps in politics with these racist lies, '' Clinton said. ' There was no evidence, but he went through it. ''

Trump kept repeating that Clinton's campaign team in 2008 started the rumors about Obama's birth, a claim that has been invalidated by numerous US media. He also said that he was the one to force ended the controversy by Obama in 2011, his birth certificate public. When Holt touched upon that Trump even years afterwards questioned Obama's nationality Trump was again the debate leading discussion.\n  \n  \n   advertisement

A group of undecided voters was interviewed by CNN after the debate found that Clinton was best for the day. Eighteen of the twenty voters in the key state of Florida favored Clinton.