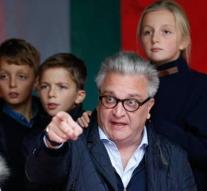 - Belgium has not known for years what it is about the self-proclaimed black sheep of the royal family, Prince Laurent (53). Subsequent premiers called the younger brother of King Filip on the mat, usually with only temporary results. Premier Charles Michel is following in a long line that threatens to take action against Laurent while voting in parliament to take down, or at least shorten, his state allowance.

The Belgian government and the royal house, however, have the problem of Laurent to thank themselves. There is no definite task for the prince, which is intended for that purpose. He wants to make some use, enjoy some popularity in some parts of the population, but despite the membership of the Senate, a royal dotation has been put on a sidewalk. In a recent biography he was labeled as the 'sinner of Laeken' and a 'prince on surplus': the superfluous prince.

Because the palace and government do not care for the prince, but soon expects him to account for his work to justify the payment of three tons, Laurent regularly goes out. As long as these trips are limited to animal parasites and birdwatching, the palace and politics are going to die. That Laurent's self-twittering, out of court, is being tamed.

However, the problems arise when Laurent addresses the political and foreign affairs without asking for permission. Attending a reception for the ninety-year anniversary of the Chinese Red Army at the end of July is, like before, a meeting with Sri Lanka's prime minister and years back a trip to the former colony of Congo.

The latter led to punishment and suspension by father King Albert II, the meeting with the Sri Lankan Prime Minister gave a 'last warning' which apparently made little impression. Even though it was noticeable that Laurent tweeted over the Chinese reception and the political response Monday for a week.

A penalty will also have to address the root of the problem to be effective. When simply turning the money tap down, Laurent will have to earn another income. For example, writing a book about the royal family may be an equally interesting option for the monarchy.