Home / World / 'Nobody for President' 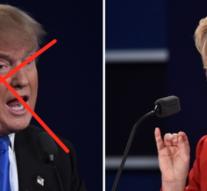 - It should not Hillary Clinton, but not Donald Trump. Neither is fit to be president of the USA, so there's only one option: vote for nobody. A Facebook page to that effect has been liked over 100,000 times.

Tormented by two unsuitable candidates there is nothing else, so it sounds. The page 'Vote Nobody' has become one of the most popular Facebook sites about the American elections. The page is packed sarcastic jokes about the current presidential struggle which knows no winner by the fans.