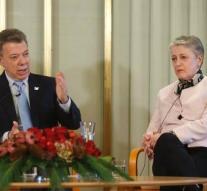 - In the Swedish and Norwegian capitals Saturday awarded the Nobel Prizes. Stockholm received the majority of their winners medal, diploma and a document from the hands of King Carl Gustaf. Oslo is the winner of the Nobel Peace Prize, the Colombian President Santos, honored in the presence of the Norwegian King Harald.

Groningen professor Bernard Feringa receives in Stockholm Nobel Prize in Chemistry for his research on molecular nanomachines. He shares the prize, which is endowed with the sum of 930 000, with Frenchman Jean-Pierre Sauvage and the Scotsman James Fraser Stoddart.

Notable absentee at the ceremony is the winner of the Nobel Prize for Literature, the American poet and singer Bob Dylan, who claims to have other commitments. He left earlier this week that he is the speech that are traditionally the laureates, has sent to the Nobel Committee, so that someone else can speak.