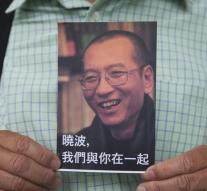 peking - The state of health of Chinese Nobel laureate Liu Xiaobo has deteriorated further. The 61-year-old civil rights activist suffers from a sore liver cancer and, according to the hospital where he is being nursed, is dying. His doctor announced Monday that Liu's blood pressure is low and that he also has a gastrointestinal inflammation.

Liu was sentenced in 2009 to eleven years imprisonment for 'undermining the state power' by publishing a civilian party. A year later, he received the Nobel Peace Prize. Due to his illness, Liu was recently transferred to Shenyang University Clinic in the northeastern part of the country.

The Heidelberg cancer specialist Markus Büchler and his American colleague Joseph Herman visited Liu last weekend. According to them, the patient is 'in principle transportable' to be treated in Germany or the US. However, China refuses to cooperate.