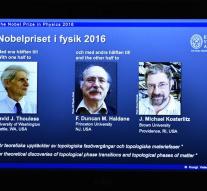 stockholm - The Nobel Prize in Physics has been awarded to the British scientists David Thouless, Duncan Haldane and Michael Kosterlitz. All three work at American universities.

The three were awarded the prize for their theoretical work on the unusual states can adopt that matter, such as superconductors, superfluid or thin magnetic layers. 'Thanks to their pioneering work is the pursuit of new and exotic states of matter open,' the Swedish Academy.

The prize sum of eight million Swedish krona (830. 000) connected. Thouless get half of it, Haldane and Kosterlitz sharing the other half.

Since 1901, two hundred researchers have won the Nobel Prize in Physics, the American John Bardeen even twice.