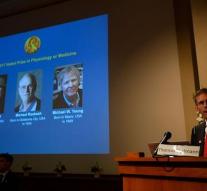 stockholm - The Nobel Prize for Medicine was awarded this year to the Americans Jeffrey C. Hall, Michael Rosbash and Michael W. Young. They get the prize for their biological clock research. The winners receive a total of 9 million Swedish crowns (940,000 euros), a medal and eternal fame.

Hall, Rosbash and Young discovered which proteins play a part in the biological clock of humans, animals and plants. This is also called a circadian rhythm. Thus every living thing knows whether it's day and night. If the body clock is not right with our environment, we feel a jet lag. In the long run this can be harmful to health.

In the coming days, the winners of the other Nobel Prizes (Physics, Chemistry, Literature, Peace and Economy) are also announced.