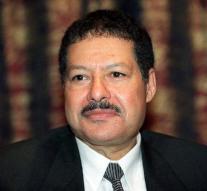 - The Egyptian-American chemist and Nobel laureate Ahmed Zewailis Tuesday deceased in the US. That made the Egyptian television released.

Zewail in 1999 won the Nobel Prize for Chemistry. He received the prize for his studies of chemical reactions through transition phases and ultrafast spectroscopy. Thus, he showed that with the aid of a high-speed laser technique it is possible to see how atoms move in a molecule during a chemical reaction. Zewails technique is called 'femtochemistry.

Zewail was seventy years old and suffered from cancer. However, the precise cause of death is not known. Since 2009 he was also adviser to President Barack Obama on science and technology. He worked at the Technological Institute of California.