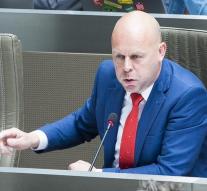 brussels - Flames of sixteen or seventeen years do not have the right to vote in local elections. For this, no majority in the Flemish parliament, appeared on Tuesday. Some political parties, the Flemish youth council, a number of political youth organizations and the children's rights commissioner had ears to the proposal.

There may be a pilot project in the Flemish municipality of Zottegem. Social Democrat Kurt De Loor (sp. A), parliamentarian and alderman in Zottegem, wants sixteen and seventeen-year-olds to vote in the elections next year, but this does not count towards the official results.

De Loor finds it 'very unfortunate' that the proposal has not reached it. 'If we mean to allow young people to participate fully, we must dare to take on the accelerator and take this initiative. '