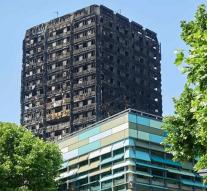 The investigator stated that he understood that many survivors want a direct person in the team, but he insists that they can only provide information and evidence. According to Moore-Bick, his impartiality is compromised in the eyes of others to name a survivor. The former judge was chosen by British Prime Minister Theresa May to lead the team.

Outside the building where Moore-Bick spoke was protested. The demonstrators included banners with the text: Justice for Grenfell.