Home / World / No trains to Brussels-Central 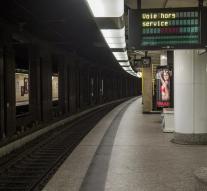 brussels - There are no trains at Brussels-Central on Wednesday morning. However, there are trains to Brussels-North and Brussels-South, so the Belgian rail carrier knows NMBS.

The train traffic was stopped after an attack on Brussels-Central, where a man caused a small explosion. The suspect was shot dead. On the station, the federal police was still busy with a trace investigation on Tuesday night. Detectors in white suits run the building in and out. The Army's demolition service, DOVO, was still on the spot.

The track investigation at the Brussels-Central station by the police was rounded off at 05:30 on Tuesday night on Wednesday. The researchers took 'a lot of material in brown bags and boxes' outside, reported Belga press office.

On Wednesday morning around 06.30pm a carriage took over the physical surplus of the man shot down by military men on Tuesday evening.

According to Belgian media, the man carried a belt and wanted to take a heavier attack. The station is still closed.

The security zone set by the police around the Grasmarkt in Brussels was lifted around 01:30 on Wednesday night on Wednesday. At midnight the authorities closed the square near Brussels-Central, because there was a suspicious vehicle.

DOVO examined the vehicle near the Smurfs stand. According to Belga press office, there was an explosion caused by the army. It is unclear whether the search from the army has yielded something, it would be a fake alarm.