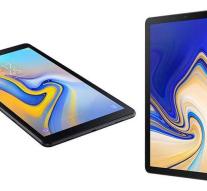 amsterdam - At Samsung they keep working through during the summer. Today the Korean technology giant introduced two new tablets: the Galaxy Tab A 10.5 for the whole family and the productivity-oriented Galaxy Tab S4.

Earlier this year, Samsung presented the smartphones S9 and the S9 plus at the Mobile World Congress in Barcelona, ​​whose sales figures, as announced this week, were slightly disappointing. The rack is clear from the smartphone market. Consumers seem to be waiting for the next major innovation with the purchase of new device.

Nevertheless, Samsung is moving forward and is likely to present next week in New York during the grand 'unpacked event' the new Note 9 smartphone and the latest line of smartwatches that will go through life as the Galaxy Watch.

At the Amsterdam Zuidas the Dutch techjournalsiten got a sneak preview of the latest tablets yesterday. Especially the S4 impressed. Samsung calls it a 2-in-1 Android tablet. The S4 is the first tablet of the Koreans that thanks to built-in DeX technology your device in a full PC environment changes.

DeX has been available for telephones for some time, but that is a separate device that you have to connect your phone to. DeX is now in the tablet. Switch to Dex mode, cable to a monitor (if you find it more convenient) and you can multitask, enlarge and shrink windows, drag content from one app to another, use keyboard shortcuts and commands.

The S4 is equipped with the Samsung S Pen. This pen debuted on the Note and is a popular tool that is in the hand like a regular pen. Writing and drawing is a natural experience. The S4 as the journalists were given to him by Samsung also had a Book Cover Keyboard, so you have a physical keyboard at your disposal.