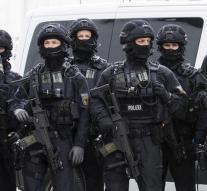 berlin - Berlin agents who had eagerly invited after being sent to Hamburg because of the G20 do not have to fear disciplinary measures. A police corps spokesman in the German capital acknowledged Tuesday that the behavior of police officers does not deserve a beauty award, but no penalties are being distributed.

The police headquarters in Hamburg recently decided to send back 220 colleagues from Berlin. The police officers were housed in the municipality of Bad Segeberg, which was reportedly wild. The behavior of the Party-Polisists (celebrating police officers) caused much fuss in Germany. According to German media, agents would have been guilty of wildlife and even sex in public.

According to the Berlin police spokesman, that disciplinary measures are missing, for several reasons. For example, there are no video clips, photographs, witnesses or evidence that would necessitate punishment. Also, the announcement about the agents' misconduct would be 'clearly exaggerated'.