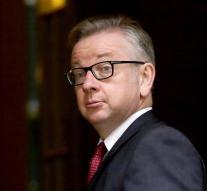 london - British Prime Minister Theresa May has Michael Gove dismissed as Minister of Justice. Gove working the Brexit referendum together with Boris Johnson, but Johnson said after the referendum unsuitable as a successor to Prime Minister Cameron. To everyone's surprise, then he made himself available as a candidate, but finished third.

British media report that Education Minister Nicky Morgan and Culture Minister John Whittingdale should step down. They are, according to the Daily Mail, seen as allies of David Cameron and therefore do not fit the newly formed government of Prime Minister May.