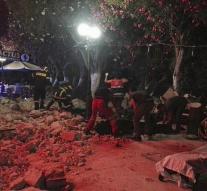 the hague - Anyone who has a family or friends who are currently living in Kos and can not contact them can report to Foreign Affairs in The Hague. That call raises the ministry after the earthquake with a force of 6.7 that hit the Greek island in the night of Thursday on Friday.

'We maintain contact with local authorities and try to find out if there are Dutch victims,' ​​said a spokeswoman. The earthquake certainly cost two people life, at least 120 people were injured. 'If people are worried and have not heard anything from family or friends on Kos, they can call us. '

'It was a great scare tonight around half past one,' said Harry van der Heijden, who is on vacation on the island. 'Everything began to vibrate, a bouncing noise. It can not be described. The first thing we encountered: how do we get out as quickly as we were in our apartment. 'According to Van der Heijden, newsreader on RadioTien, it is now being looked at whether it is safe to return to the hotel. Further, in the city, the damage is considerably higher.