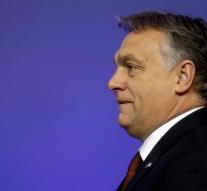 budapest - There is as yet no constitutional amendment in Hungary the inclusion of migrants impossible according to EU rules. In a vote Tuesday, the required two-thirds majority was not achieved.

The controversial proposal followed a referendum in which a majority of Hungarians voted against the numbers imposed by Brussels refugees to record Member States. The referendum failed because not enough people participated.

The government wanted the amendment can continue decide how many migrants shelter.