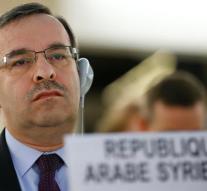 damascus - Friday rescuers could not even begin medical evacuations from besieged eastern part of the Syrian city of Aleppo. ' Our staff is ready, but we have no security guarantees, '' said a spokesman for the International Red Cross.

Rescuers hoped the truce in Aleppo using to extract hundreds of wounded and sick from eastern Aleppo and supplies and deliver food.

The Syrian ambassador in Geneva said that Syria two days ago has given permission for the medical evacuations. The government has ready buses and ambulances, but the evacuations are not going because ' terrorists' bombard the corridors and crossing with mortars and snipers, 'he said.

The rebel-controlled east of Aleppo received in recent weeks to endure the heaviest bombardment since the start of the civil war. An estimated 250 000 people are trapped in the besieged district.