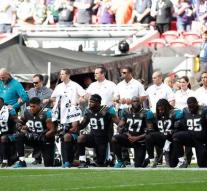 new york - It must be an honor for every American athlete: visiting the White House after obtaining a title. But President Trump now closes the door for athletes who fetch his nose for him, such as striker Stephen Curry of champion Golden State Warriors.

The statement of Trump on Twitter has led to great fuss in the sporty America. Various black athletes see the president's words as an attack on black America and protested this weekend by not going to stand during the national anthem.

Trump called for NFL sports ground to take action against players kneeling the American anthem for an American Football match. The first to do this was the black quarterback Colin Kaepernick (San Francisco 49ers) as protest against police violence towards the black population, when Obama was still president. Kaepernick has not yet found a new club in the new season, which has just begun.

Trump believes that the powerful clube owners need to dismiss such players ('bastards' in Trump's eyes) because they do not show respect for the American flag. And if this is not done, the public must boycott matches according to the president. Black Americans just think that a boycott should be allowed if players are prohibited from performing such protests.

The American Football Bond says that Trump's statements sow unnecessary division. Basketball team The Golden State Warriors will let you know instead of visiting the White House to celebrate the championship now to choose social work in the city if the club is to be a Washington outfit.

Sporticoon LeBron James, who actively campaigned for Hillary Clinton, blended himself into battle. James, the great star of basketball club Cleveland Cavaliers, said it was formerly an honor to visit the White House, but no longer since 'That Nothing' in The Oval Office.

Trump now has the stick with the two best-known and biggest American basketball players at the moment, with millions of fans. It will be difficult for Trump to win this fight, but during a campaign meeting just before the weekend he got his hands off, especially his white supporters. A schisma threatens in the increasingly divided country, which in any case seemed to be in the sports field.

Yesterday, just like every Sunday, there were a series of American Football matches on the program. At various times, black players chose to join the protest and kneel during the national anthem. Like, among other things, the owner of Jacksonville Jaguars, Shahid Khan, a Pakistani-American multimillionaire.

Also in the baseball this weekend was the first knee injury, from the black catcher Bruce Maxwell of The Oakland A's. Singer Stevie Wonder also joined the protest by making a 'knee for America' concert at New York.