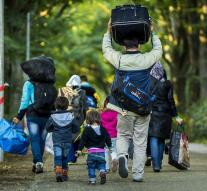 brussels - Belgium may not return an Afghan woman with five children to Germany, because a 'humane care' is not guaranteed. This has given the Belgian Aliens Litigation Council, Belgian media said Friday.

The family had sought asylum in Germany and had traveled to Belgium. According to the so-called Dublin agreements between EU countries of asylum seekers may be sent back to the country where they originally requested asylum. Germany went there in this case agree, but the woman appealed.

The Belgian council went with the arguments of the woman's asylum centers in Germany are overcrowded and that women and children in tents or containers arrive with limited plumbing and without any kind of privacy.