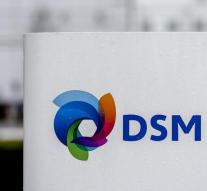 delft - On the afternoon of DSM in Delft, salpeter vapor was released on Saturday afternoon. Two employees were cleaning a centrifuge around 13:45 when the corrosive toxic nitric acid evolved from a vessel.

Fire brigade and medical services were fast on site and prevented victims from falling. The two employees of the biotechnology company have been carefully taken care of by ambulance staff and do not appear to have breathed the substance, according to DSM spokesman.