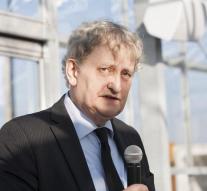 - There is no list of names of Amsterdam students who come from a family Gülen.

That Mayor Van der Laan said Tuesday, message AT5. Last week, the chairman of the Amsterdam D66 had said that such lists exist which directly led to a lot of fuss.

Van der Laan then gave all that he knew nothing, but it would find out.