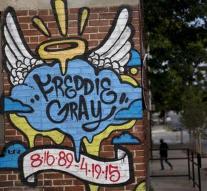 Public prosecutors in Baltimore brought six agents to court, but none of them were convicted.